We use cookies when you visit our websites to give you the best experience possible and to keep things secure.

We'd also like your consent to set other cookies to help us further improve our website and to tailor the marketing you see on apps and other websites you visit.

What is the best way to invest for retirement - investments or cash?

Making sure we have enough money to last for as long as we live is a big responsibility.

What you decide to do with your pension savings – especially if you need to take an income from it – could have an impact on your standard of living.

What most people want in retirement are undoubtedly flexibility and control over their money, growth and limited risk. But how do you balance these?

Cash, whether your money’s in the bank or in a cash investment, may seem like the obvious, ‘safe’ choice for your money.

And for some people this could be the right option – for instance, if you need access to your money in the short term.

After all, investments can appear complicated. And a market crash could dramatically reduce the value of your pension and with it the income you receive. This is because investment returns aren’t guaranteed and you could get back less than you paid in – even if there is no crash.

But is cash always the safe option? Although it’s less likely than investments to fall significantly in value, the odds are that if you keep your money in cash it might not last as long as if you had invested it over the long term.

That’s because you won’t get much growth – one of the key things our customers have told us they want from their retirement money and then there’s inflation – we’ll come back to that later.

Over time, you may get more out of your pension if you invest it.

Your money is generally secure in a bank or building society. But people choose to accept the risk associated with investing because over the long term, investments usually do better than cash.

The need for investment growth

Generally, the longer you leave your money invested the better your chances of seeing it grow.

Yes it will go up and down, especially in the short term. We looked at the 1,608 funds listed by the Investment Association in the UK with a 10-year performance history.

Of these 96% gave a better return than cash over that period. And the average return was 6.21% a year.

The chart below illustrates this. Compare Bank of England base rates, which we use to represent cash (the pale blue line) against higher risk investments over the last 20 years (the dark blue line).

In this case investments did significantly better – but there’s no guarantee that will always be the case because you can’t rely on past performance to predict the future. The level of risk is the key difference.

Representative Bank Rate is not inclusive of charges.

Some people shy away from investing as they worry about the ups and downs.

But when you are investing over 20 or 30 years – as you’re likely to be in retirement – it’s vital to think longer term or you could end up looking back with regret.

The other key reason to consider investing in retirement? To fend off the silent assassin attacking our savings every day: inflation.

The effect of inflation on cash isn’t good news

Imagine I told you that you would never get a pay rise again, while all around you colleagues and friends saw their salaries or incomes rising.

How would you feel?

It probably wouldn’t be a problem for a year or two, but what about 10 or 15 years down the line when everyone else’s salaries had increased, and yours hadn’t?

Your standard of living would fall compared to the people around you – and that’s not a nice thought.

But that’s what inflation† is doing to your savings now. Silently, without fuss. And as your retirement could easily last 30 years or even longer, inflation can be a real problem.

Inflation means that a ‘safe’ cash investment effectively loses you money over the longer term.

The chart below shows you the effect of inflation on low-risk investments over time. Since 2008, when interest rates have been very low, your safe investment would be steadily worth less and less in today’s terms.

Cumulative returns before and after inflation to end December 2016, gross income reinvested.

Representative Bank Rate is not inclusive of charges.

‘Adjusted for inflation’ means inflation based on Consumer Price Index (CPI) has been taken into account.

Investing while taking an income from your pension

If you’re investing in retirement, you’re likely to be taking an income from your pension.

So this time, let’s look at the same 20-year time period and investment options as in the first example – but adjusted for the effect of inflation and with the income taken into account.

In this hypothetical case, if you had put your money in the bank and were taking 5% as income you would have had approximately £72,800 left after 20 years – that’s also taking into account the interest you would have earned.

This is calculated on interest earned based on Bank of England base rates over the 20-year period.

But after factoring in inflation that could be equivalent to only £32,800 today.

With another 10 years of retirement ahead of you, that may not be enough to be sure your money would last you. However, if you’d invested in a fund that gave you the same returns as in the first example, you’d still have £117,900 left – or £59,500 after inflation. So over this period your money would have lasted better. 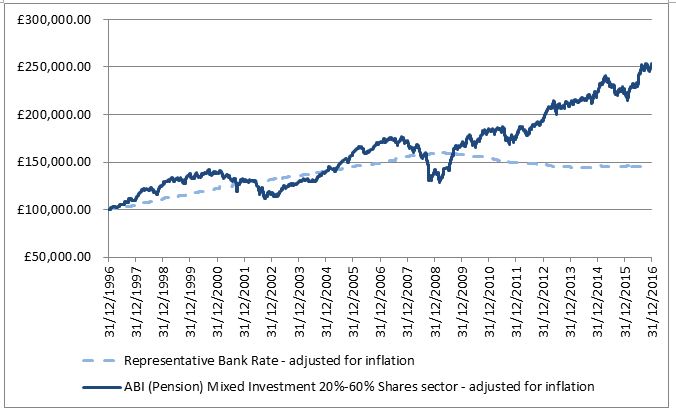 Representative Bank Rate is not inclusive of charges. ABI sector performance is net of charges.

‘Adjusted for inflation’ means inflation based on CPI has been taking into account.

We’ve looked at the past 20 years. But since investment markets are variable and past performance isn’t a reliable indicator of future performance, that doesn’t tell us how they’ll do in the future.

So we asked our experts for a more detailed analysis.

They’ve compared cash rates with investments over a wide range of market conditions.

Assuming, for this example, a 4% income level, but one which can increase with inflation, what do we see?

Across all the various scenarios we’ve looked at, the typical length of time pension savings which are in cash can last is 23 years.

But in investments – assuming you have a mix of investments with varying degrees of risk††– it’s 37 years, over 60% more. Obviously there are risks involved with investing, and your money could run out earlier so it’s a decision to be made carefully.

So if you’re looking at a 20 to 30-year retirement, what do you need to do to give your money a better chance of lasting?

Whether you’re taking an income from it or not, investing sensibly can help you get the growth you need to help your pension last, balance risk and beat inflation.

But what if you’re one of those people who find investments confusing or don’t know quite where to start?

If you’ve read some of my other blogs, you’ll know that there are specific risks which come with investing in retirement – especially in the early years if the stock market is going through a volatile phase.

There are straightforward options available that can help you balance the income you take now with potentially making it last as long as possible – but if you’re in doubt, speak to an expert to get information or advice on your own situation.

A pension is an investment. Its value can go up or down and it may be worth less than you paid in. Investment returns aren’t guaranteed. Past performance is not a reliable indicator of future performance. This blog and any responses are not financial advice.

††We used all the funds in the Investment Association universe so they’re from across the risk spectrum.